Normally in mathematics, the percentage change is usually given by; %Change = (change/initial value) *100. The change is usually a difference between the two values in context. Change =new value-old value. We can also accomplish this task quickly and easily in excel. So supposing we need to find the percentage change between two values in excel, we would use the following steps.

2. Enter two distinct values in two separate cells. Probably vertically adjacent cells. E.g. D3 and C3. Let the first value you enter in a cell by the initial value and the second one be the value after the change. 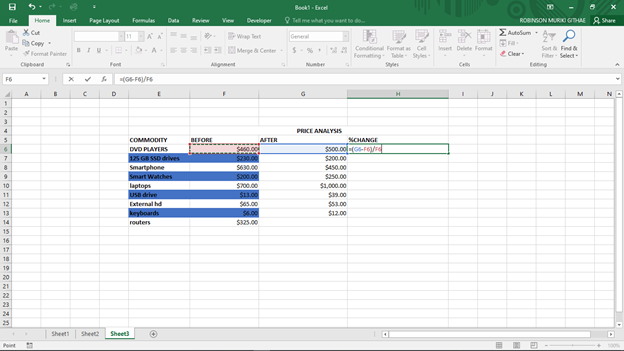 4. Type in the following formula. Note that the formula basically performs a subtraction. This essentially finds the change.

5. Now Divide the result of the formula with the Initial value. The final formula should be as follows. 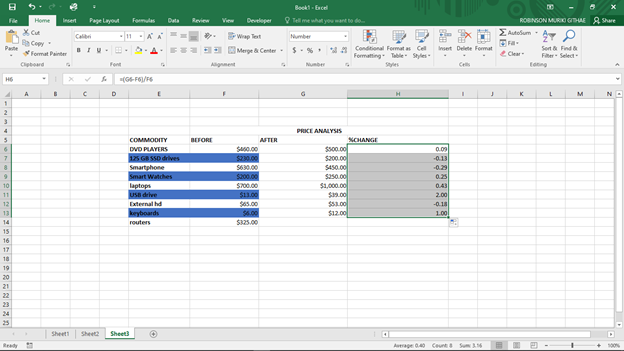 Navigate and select the Home tab.

7. Under the Number group, click the percentage symbol to apply a percentage format. The value inside the cell is automatically changed from a decimal to a percentage. 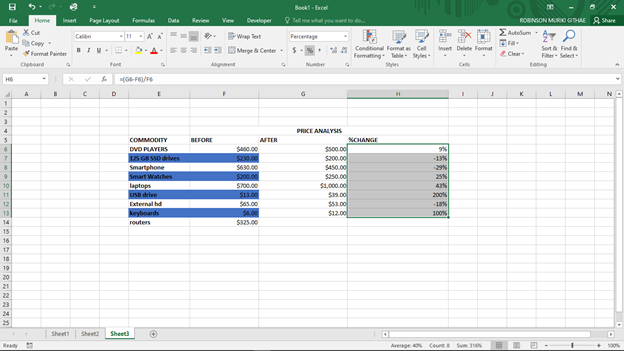 Note that: The % change can be positive or negative. A negative change shows a decrease while a positive one represents an increase.

To find the percentage increase

2. Identify two cells were an increase was noted. Calculate the difference in values for the two cells after increase. e.g. =(E7-D7) 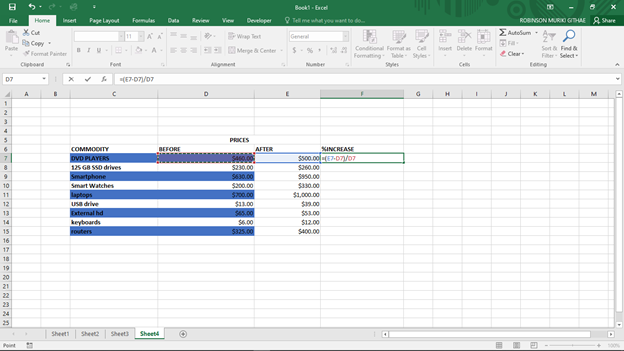 4. Drag the top cell to auto calculate for the rest. Then Press the percentage symbol under number group. 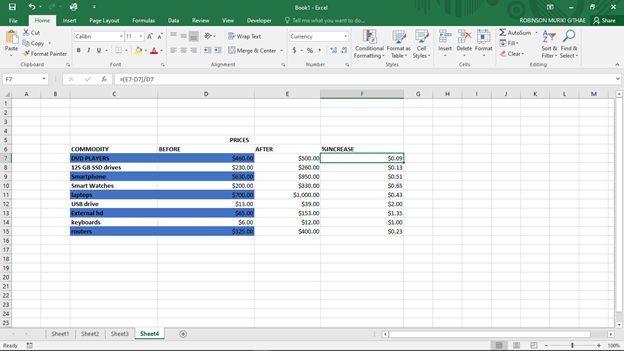 After pressing the % symbol it should now look as follows 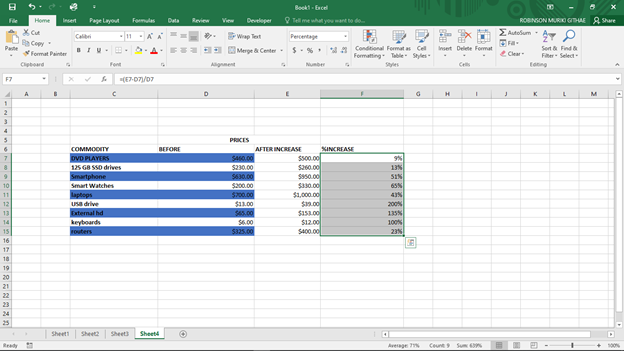 Note that: We can increase the value of cell D7 by multiplying the contents of the cell with the percentage increase as follows 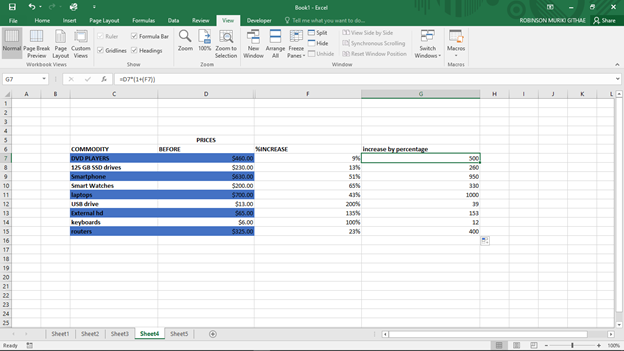 3. Excel formula for percentage of total

Percentage total = (value/Total value) *100. To get this in Excel

1. Identify the cell with total value and the value to be quantified. 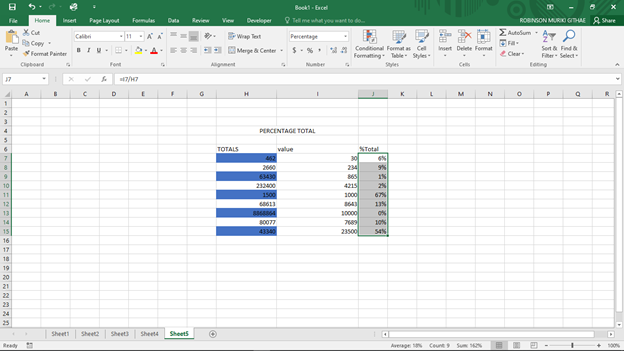 2. Add a column for the percentage of the total. 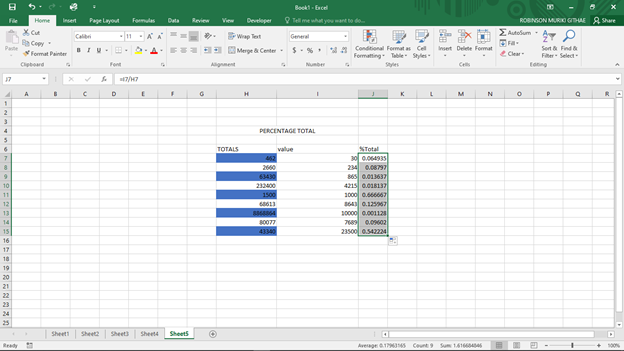 3. Click on a cell in the column created. This is the cell into which the formula for the percentage total is to be entered.

5. Press the percentage symbol under the number group while in the Home tab. 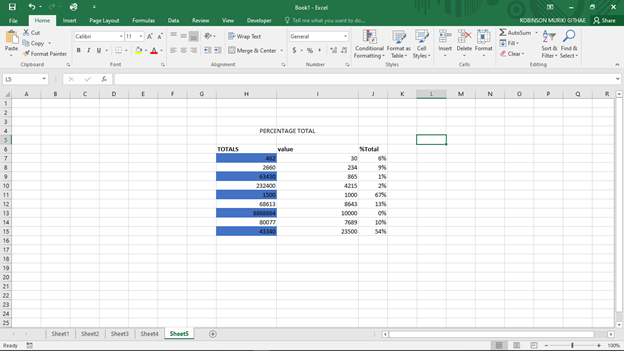 %difference= (absolute Difference/ average value of the two) *100. The average is given by: (first value+ second value)/2

2. Add a column for %Difference. 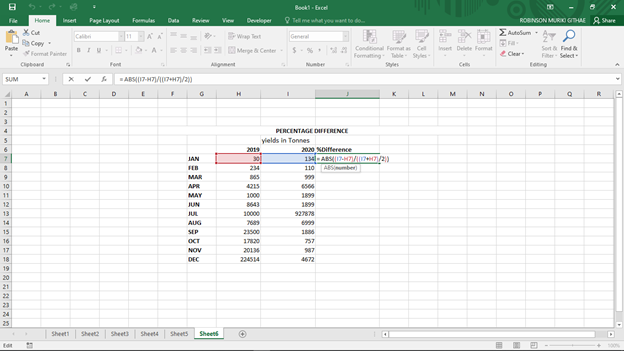 3. Type the following formula in the topmost cell in the column.

4. Press the percentage symbol under the number group. 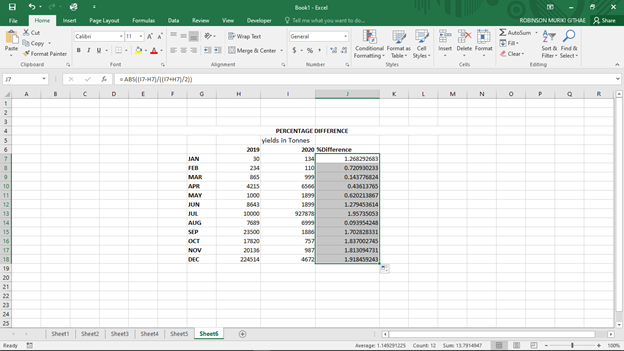 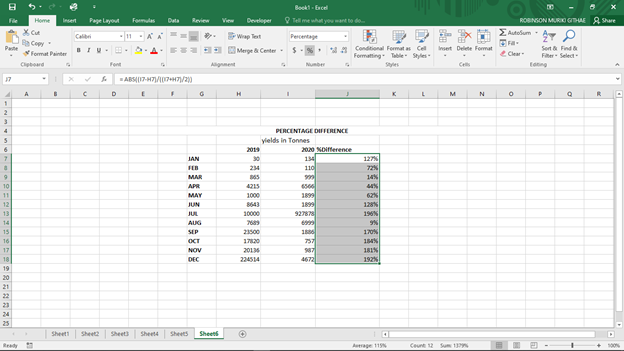 Percentage decrease = (decrease/initial value) * 100. To find the decrease we subtract the new value from the old one.

2. Perform subtraction of the two cell values to find the difference

3. Edit the formula to Divide the difference with the initial number 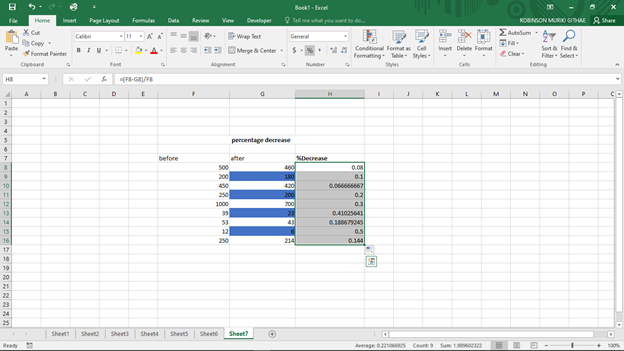 5. Click on the cell and select the percentage symbol.

Normally, to get the percentage, we usually sum the totals for the values that we wish to have the average and then divide the result with the number of items. The same method can be followed for percentages.

We can also opt to calculate the percentage average comfortably just as we would for normal figures using the average function.

1. Highlight the row of cells that need to have percentages. 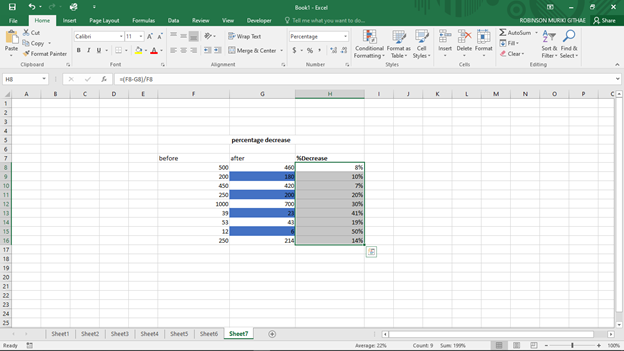 3. Add another column OR Cell for % average.

4. Type in the following formula the top cell of the column 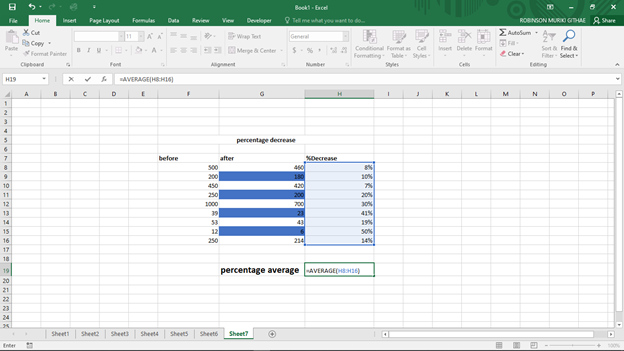 In most instances of our lives, we are constrained to set targets. At the end of a given time, we then identify our progress or simply our achievement with respect to the targets we had set. From the achievements and target, we can then calculate the percentage of score/achievement very easily. It is important to note that the percentage achieved is calculated as follows

1. Add a column for % achieved. This column will include the results of our formula. 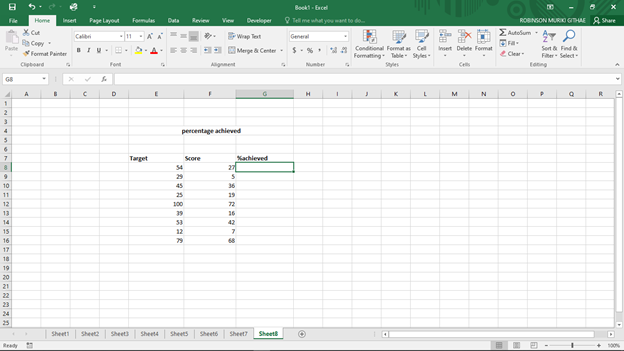 2. Add target values against the corresponding values of achievement. 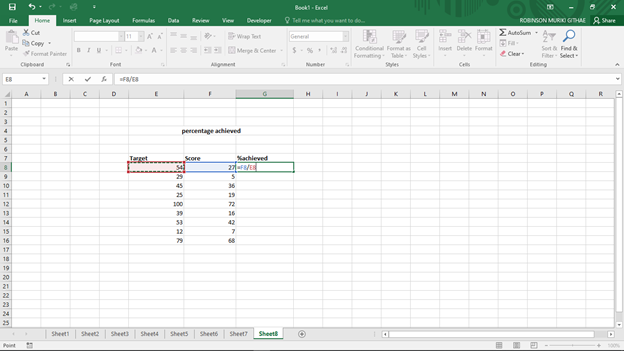 3. Type in the following formula in the topmost cell of the %achieved column. 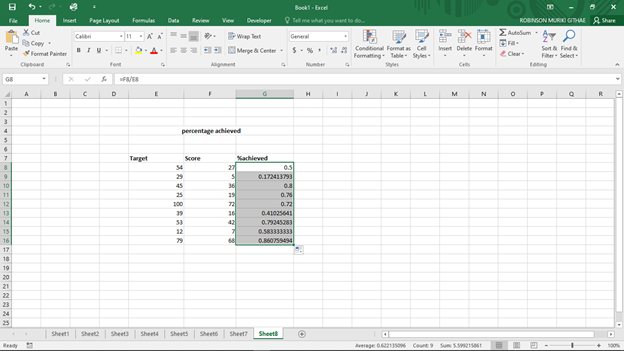 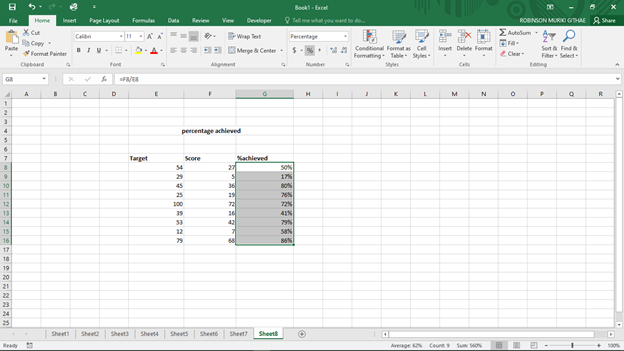 8. Using a specific cell as the reference for achievement

We can also have a given single cell to house our Target. Using absolute referencing we can then calculate the percentage of achievement.

Type the following formula for procedure 3 and press the percentage symbol: 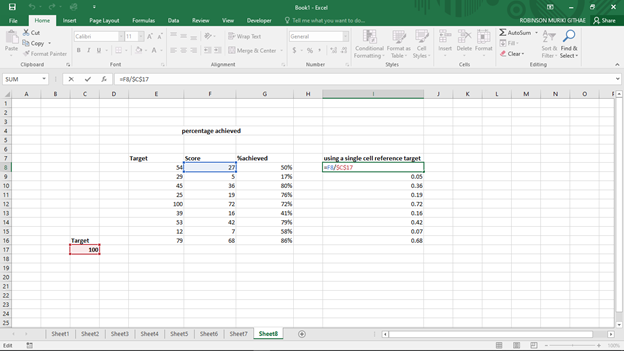 1. Add a column for a result as well as a percentage to add.

2. Ensure your column has the right percentages. You can add values, press the % symbol and make some editing.

3. Type the following formula in a cell inside the result column. 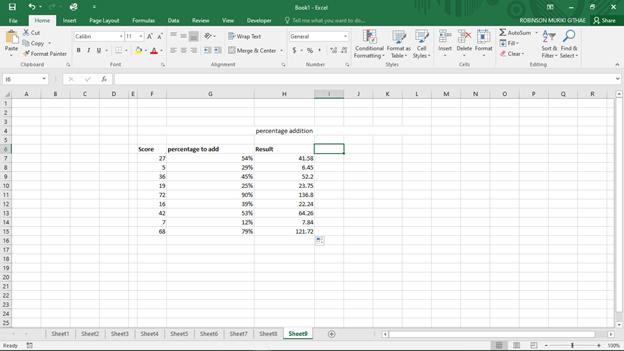 1. Include a column for the result. 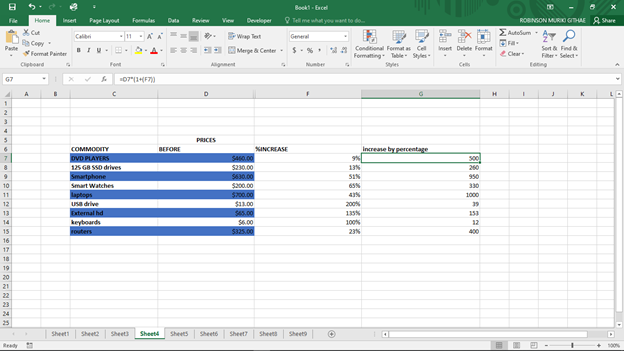 3. Type the following formula in the cell.

4. Press Enter key on the keyboard.

5. Save changes. This will store any unsaved changes that might have been made.

How to apply the same formula to multiple cells in Excel

How to sort alphabetically in Excel and keep rows together