Numbers are numerical values. They are at times referred to as digits or integers. They are used nearly everywhere around the globe. The majority of activities or scenarios we happen to come across in our daily lives will always involve counting in one way or the other.

Nearly everything depends on or revolves on counting in this world. The act of tallying a certain quantity to obtain or to reveal the number of items or several objects in a set is what we mostly refer to as counting

We count to obtain the value of things numerically or in terms of numeral values. In most cases, we count in numbers, which means we use numbers to identify the number of items or the number of objects. As said earlier, counting is done everywhere even when using excel sheets.

In excel sheets we do the count of the number of rows, columns, cells, items in the rows, and columns and even the number of empty cells in an excel sheet is also counted. Counting is general and done in almost all aspects of life or our daily routines.

To do a quick count of cells that contain numbers in excels, we have some steps to follow, and some of the steps are discussed below in detail;

Open a new excel sheet from your computer and record general data which includes texts and numbers as shown below. 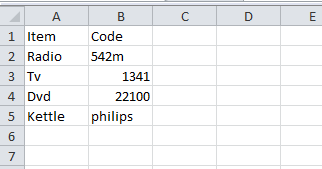 The second step will be to get the number of cells with numbers in our recently created data. This will include the counting of the cells with only numbers. To have this done, we use the function COUNT. This function will help us get the tally of all the cells with numbers. To count from cell B2 to cell B5, we write the formula in the formula bar with the format; = COUNT (B2: B5) and click on the enter button to execute the command. The sample is as shown below.

The number of cells with numbers is two from the case above. Cell B2 is a string even though it has a number in it and cell B5 contains a text.

How to number cells vertically in Excel

Three ways in Excel, How to delete Duplicates?