The most common type of writing is got to be horizontal writing where the texts, characters, and numbers originate from the left going to the right unless some adjustments have been done to the writing or paragraphing.

Vertical texts are mostly used in writing the title of books and when you want to emphasize the wording of the texts. They are used in advertisements for products.

Below are some of the steps to go about transforming the texts to appear vertically, they may include the following;

Open the excel sheet from your computer and write some texts on any cell. If you already have the data to transform you are good to go to step two. An example of the excel sheet is the one below.

The next step is to highlight the texts that we want to transform from vertical to horizontal. Because all the text appears on the first row, we select the first row. After selecting, go to the Home tab, under alignment select orientation, it has the icon of (ab) and an arrow. Scroll down and select the vertical text. 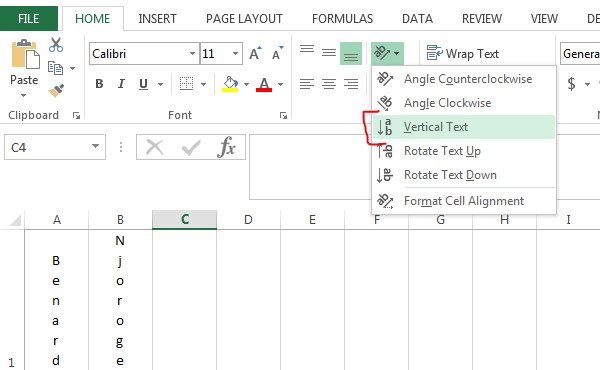 How to Insert Multiple Rows In Excel With Formula

How to rotate data 90 degrees in Excel